A rare fossil that resembles the skin peeled from an extinct creature has been donated to the Alabama Museum of Natural History, and experts say its scaly appearance is deceiving. 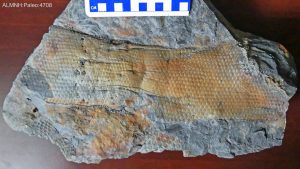 The fossil, which is about a foot long, is actually the extremely well preserved “skin” of a Sigillaria — an extinct plant that counts as monstrous by modern standards.

Sigillaria lived in the Paleozoic Era — ~380 to 255 million years ago — and grew to around 90 feet, according to the museum’s Curator of Paleontology Adiel A. Klompmaker.

As for the “diamond-shaped” marks, those are scars created when leaves spouted directly from the plant’s stem and later fell off, he said.

Artist’s renderings of the Sigillaria depict something akin to a two-headed palm tree — one thick stalk topped by two bushy ears of leaves.

The fossil is a “marvelous” on multiple levels, Klompmaker said.