Field Station of the University of Alabama Museums

Harrell Station is an important site for paleontology in the SE USA, located in the Black Belt region near Marion Junction, Dallas County, Alabama. The sediments of the Mooreville Chalk rock unit are exposed here in a series of gullies and contain a great variety of marine vertebrate and invertebrate fossils from the Cretaceous period. Over 50 macrofossil species have been reported from the area so far, including 15 new species. Microfossils were diverse as well with well over 100 known species. The age of the sediments is about 82 million years (early Campanian part of the Cretaceous period) based on the study of these microfossils.

During that time, sea level was over 200 m higher than today globally and the Gulf of Mexico covered nearly all of Alabama except the northeastern part. Sea surface temperatures in Alabama were higher than today with around 25°C (77°F). The ocean at what is now Harrell Station was moderately deep (< 200 m) and the site was far away from the coastline. On the sea floor, tiny particles of limestone and clay built up over millions of years, with fossils embedded in them.

Eugene Allen Smith (the 2nd state geologist of Alabama and instrumental in the early days of the Alabama Museum of Natural History) wrote already in 1900 about the gullies in the area near Marion Junction. Active fossil collecting and research in the area began decades later. In the summer 1945, Mr. Barber from the Field Museum in Chicago explored West Alabama near Eutaw and found fossil bones. He enthused people at the Field Museum so a crew including paleontologist Ranier Zangerl came out in the fall. During that trip, they learned about fossils near the railroad station of Harrell Station and went there. It turned out to be a very successful trip. The 2nd expedition took place in May of 1946, during which also the first dinosaur remains of Alabama that could be ascribed to a species were found. Additional trips were organized in 1947 and 1949.

The rock unit exposed at Harrell Station is called the Mooreville Chalk. While the word chalk implies that that the rock is composed almost exclusively of limestone, only a little over 50% on average is actually limestone. Clay represents another important component of the Mooreville Chalk (about a third), whereas sand and silt-sized particles make up the remainder of this rock. Rather than a chalk, the rock is best classified as a marl. The limestone is full of fossils and is made up primary of microfossils with calcitic plates called coccolithophores, which are single-celled planktonic organisms. The Mooreville Chalk is 110 m (360 ft) thick in Dallas County, and about 15 m of it is exposed at Harrell Station. These 15 m were deposited in less than 500.000 years.

Many fossil species have been reported from the Harrell Station area since the 1940s. A literature survey by UA’s Curator of Paleontology in July 2020 resulted in 9 species of shark, 23 fishes, 9 turtles, 7 mosasaurs, 4 dinosaurs including a bird, 1 pterosaur, 1 crocodile, 1 worm, 1 oyster, 1 clam, 1 bryozoan, 30 ostracods, 15 planktonic foraminifera, and 4 coccolithophores. This is not a complete list of species that are found at Harrell Station. Dozens of additional species, mostly already described from elsewhere, are present in museum collections and await verification.

Whereas the literature may give the impression vertebrates dominate the macrofossils at the site, the reality is very different. While vertebrate fossils such as isolated teeth and vertebrae are present, invertebrate fossils are much more abundant at Harrell Station. Invertebrates that can be seen without a microscope, particularly bivalves, are much more common than vertebrates. Roughly, for every tooth, one can easily find 100 or more bivalves in many places at Harrell Station. For microfossils, 1 cm3 (about the size of a cube of sugar) contains at least 8–10 billion nannofossils! 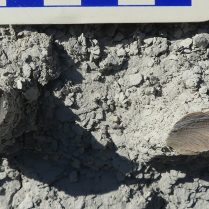 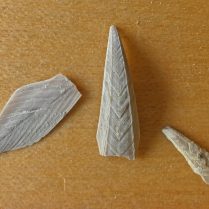 Plates of the stalked barnacle Arcoscalpellum. 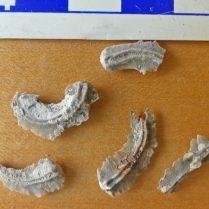 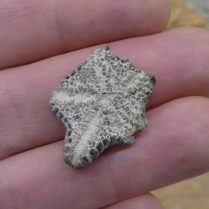 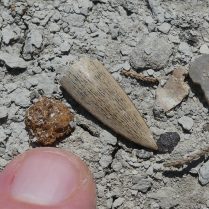 Tooth of Protosphyraena nitida, a swordfish-like animal that could grow up to 2 m in length. 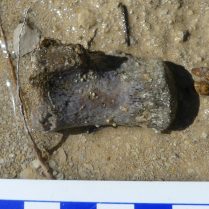 Vertebra of a mosasaur. 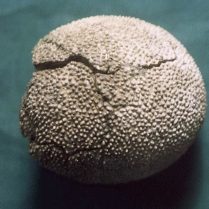 One of the most remarkable finds from Harrell Station: the only known dinosaur egg. Found by UA Museums board of regents member Prescott Atkinson; photo by Charles Cox. 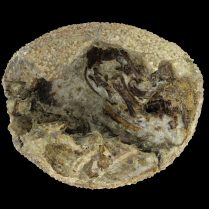 Bones of the dinosaur embryo within the egg. Photo: Jonathan Armbruster. 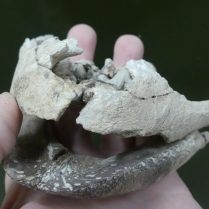 Beak of the turtle Toxochelys. 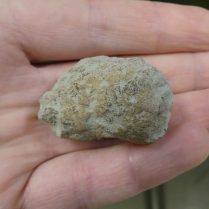 A coprolite or fossil dung. 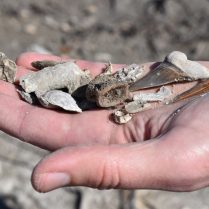 Selected finds from a day in the field.

Animals and Their Tracks and Plants

A variety of animals and plants live at Harrell Station. A full inventory of all species has not been performed, but the varied landscape of forest, chalk gullies, streams, and some meadows allows different animal and plant communities to coexist at the site. More about life in the Harrell Station area can be found on iNaturalist.

Since the 1940s, scientists have done much research on the fossils found at the Harrell Station area. The first wave was based on collecting efforts in the mid-to late 1940s. Papers from 1948–1970 described a diverse fauna of turtles, dinosaurs, mosasaurs, and fishes. Research and collecting efforts continued subsequently, focusing mostly on vertebrate fossils with a remarkable increase in research interest and scientific articles from 2010–2019. Microfossils such as coccolithophores, ostracods, and planktonic foraminifera have been studied in detail as well, which has helped to determine the age of the Mooreville Chalk exposed at UA’s Harrell Station Paleontological Site. Limited research has been done on the larger invertebrate fossils so far. In total, fossils from Harrell Station have been used to describe 15 new vertebrate species, 13 of which are still considered valid.

University of Alabama Harrell Station Paleontological Site is not accessible to the general public. The property is entirely enclosed by private land and is gated and fenced off.

1. Museums From Your Home episode on Harrell Station, 16 April 2020

If you have any questions or remarks, feel free to contact the Harrell Station property manager: