The Alabama Avocational Paleontologist Award honors an individual who has made outstanding contributions to the field of paleontology in Alabama. This person is an avocational (amateur) paleontologist defined as someone who does not have a formal education in paleontology and does not have a paid job in this field. The individual does not necessarily have to live in Alabama. In rare cases, the award may be offered to multiple people at the same time, where deemed appropriate. This annual award is made available by the Alabama Museum of Natural History and the Department of Museum Research & Collections (both part of the University of Alabama Museums).

Outstanding contributions to Alabama paleontology can be varied: (1) collecting, preparing, and donating fossils, (2) outreach/education to the general public, (3) participating in scientific research or popular writing, (4) promoting collaboration between avocational and professional paleontologists, (5) volunteering at a museum or other institution, and/or (6) helping to preserve fossil sites.

The award consists of an engraved plaque for the recipient to be presented at the Alabama Museum of Natural History, Tuscaloosa, Alabama, during the celebration of National Fossil Day in October each year, whenever possible. The name of each awardee will also be engraved in another plaque that will be displayed in a future exhibit in the Alabama Museum of Natural History about the role of avocational paleontologists along with fossils found by avocational paleontologists. Recipients will be announced through a news release and on social media. 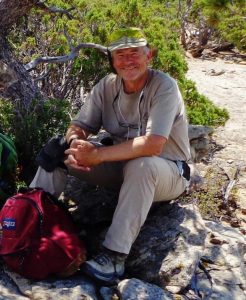 2020 – T. Prescott Atkinson.  The inaugural ALAP award was awarded to Prescott for his enormous contributions to Alabama paleontology spanning about five decades. Prescott has collected and donated many thousands of fossils to multiple museums, including vertebrates, invertebrates, plants, and tracks. Among his many discoveries in Alabama are a Late Cretaceous dinosaur egg from Harrell Station and rare insect wings from the Pennsylvanian of northern Alabama. Furthermore, Prescott has played a key role in the preservation and management of the Stephen C. Minkin Paleozoic Footprint Site (Union Chapel Mine) in Walker County, Alabama. Prescott is the vice-president of the Alabama Paleontological Society, arranging monthly talks. He is also an author of multiple scientific and popular papers in paleontology, and he has participated in various outreach events. In sum, the committee concluded that Prescott is a very worthy first recipient of this award. View the news release and the recorded live broadcast.