The first fossils in the University of Alabama collection (fossil nuts from Madison County, Alabama) were reported by William MacMillan in 1831. Later, Irish geologist Michael Tuomey (1805–1857), professor at the University of Alabama since 1847 and the first state geologist since 1848, was the first person to assemble a sizeable collection consisting of hundreds of fossil species. The burning of the campus on April the 4th of 1865 during the Civil War included buildings in which fossils were reportedly stored, such as the Rotunda, Lyceum, and another building near the Lyceum. This event meant an enormous, irreplaceable loss for the natural heritage of Alabama. However, a part of Tuomey’s fossils stored in the Rotunda survived the war and are retained to the present day. According to some, Eugene Allen Smith (1841–1927) played a role in saving the remaining fossils, but he can certainly be credited for rebuilding the fossil collection. Smith became a professor at the University of Alabama in 1871 and the second state geologist in 1873. During the late 19th and early to mid-20th century, Smith, J. Anderson, Truman H. Aldrich, Herbert H. Smith, Daisy Smith, Walter B. Jones, and others expanded the fossil collection of the Alabama Museum of Natural History, which became established as an adjunct to the Geological Survey in 1910.

In 1961, the Alabama Museum of Natural History and the Geological Survey of Alabama separated, with the former becoming more officially linked to the University of Alabama. The fossil collection was divided between the two institutions subsequently. In the following decades, the collection of the Alabama Museum of Natural History was further expanded and curated by UA employees such as (in alphabetical order) Dana Ehret, Douglas E. Jones, John Hall, Brown Hawkins, Ed Hooks, James Lamb, James Parham, Mark Uhen, and others. Additionally, the generous donations of many fossils by avocational paleontologists such as  (in alphabetical order) Prescott Atkinson, Ron Buta, Caleb Curren, David Leuth, George Martin, and many others, also contributed greatly to the collection’s growth. In 2005, the vertebrate fossils and Pennsylvanian trace fossils from Alabama’s Union Chapel Mine were transferred from the Geological Survey of Alabama to the Alabama Museum of Natural History. Another major change happened in 2016, when the UA Museum’s Department of Museum Research and Collections was created. The fossil collection has since been under the supervision of this department instead of the Alabama Museum of Natural History, but the Museum’s affiliation continues with the usage of ALMNH museum numbers for specimens, exhibition, and outreach uses of the collections.

The fossil collection is housed on the 3rd floor of Mary Harmon Bryant Hall on the University of Alabama campus and consists of at least 500,000 macrofossil specimens. The majority of these specimens are invertebrate fossils, but major vertebrate fossil collections are also present. Trace fossils such as footprints are also an important part of the collection (> 1500 specimens) and fossil plants comprise a small part of the collection (~700 specimens). The collection is mostly organized into these four groups. Geographically, most specimens (> 85%) originate from Alabama including Harrell Station, whereas the remaining fossils originate from other US states, mostly Florida, and other countries.

Most of the collection is a research collection, but small parts are designated as teaching and type collections. The majority of the vertebrate, plant, and trace fossils have been catalogued and can be found in the online database Arctos [Select “ALMNH:ES” under Collection]. Conversely, the invertebrate fossils are largely uncatalogued; those that are will be uploaded into Arctos in the future.

Some of the highlights of the fossil collection:

The scientifically most important specimens of a collection are type specimens. These are specimens based on which new species have been described. As of August 2020, the paleontology collection houses 28 valid type specimens, including 23 holotypes, 1 lectotype, 2 syntypes, and 2 paratypes (see table below). Nearly all types originate from Alabama.

Type specimens in the fossil collection arranged by the year the species was described. Click on the table for higher resolution. More information about vertebrate type specimens can be found in Arctos. 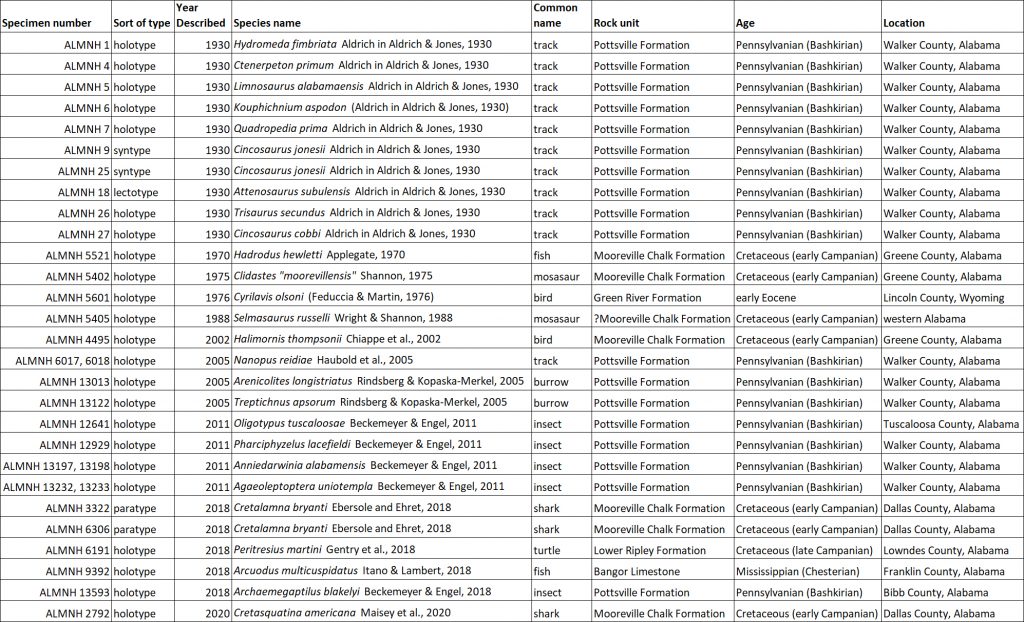 Uses of the collection

First and foremost, the collection has been and is being actively used for scientific research. Scientists, students, and avocational paleontologists from Alabama, elsewhere in the US, and around the world regularly visit our collections to study fossils. Specimens are also loaned to researchers. Every year, paleontologists who have studied fossils in our collection publish multiple scientific articles on that material. Staff, student interns, and volunteers work together to curate specimens as new material gets accessioned and when existing collections get cataloged, digitized, and/or rehoused. Particularly striking or characteristic fossils have been and are being used for permanent and temporary exhibits at the Alabama Museum of Natural History and elsewhere on campus. Finally, fossils of our collection are utilized for classes, as part of public and online outreach events, and during tours of the entire UA Museums collection or the paleontology collection specifically.

People and other information

Feel free to contact the curator if you would like to become a volunteer or intern of the paleontology collection to help curate the collection, learn more about fossils, and acquire multiple new skills.

The paleontology collections are supported by the Paleontology Collection Enhancement Fund. Please check it out for tax-deductible donations.

Wilson, B. M. 1985. The Geological Survey of Alabama and the University of Alabama: A coordinate history. Earth Sciences History, 4, 59–62.